One of the things I've always admired about Walt Disney World is that it always seemed to be very friendly to photographers.  Disney has plenty of interesting photo spots marked in its parks to help visitors know where to get a good perspective for their photos. There are plenty of staff photographers around to capture moments at some of those photo spots, so nobody has to get left out because they're taking the photo.  If you go on some of Disney's thrill rides, they have cameras that capture you on the ride, often during the peak of action.

Photography is a hobby of mine.  The various theme parks and tourist attractions offer some rich visual treats that make for great photo subjects.  I was inspired to go shoot high dynamic range (HDR) photos at Downtown Disney tonight by looking at the work of Trey Ratcliff.  He taught a photo workshop in Tampa a couple of months ago and I went to learn his techniques.  Trey has some excellent images of Walt Disney World and I wanted to see if I could capture some of that magic.  Seriously, click that link and check out his excellent work.

HDR photography is essentially a product of mixing together multiple photographs of a subject taken at different exposures, from dark to light.  As a result, you end up with a photograph that has the right level of exposure through-out the scene, much like your human eye would detect.  Cameras, unfortunately, don't see light the same way we do. In order to make sure those photographs match-up with each other, you take the photos on a tripod in a burst of exposures.

Unfortunately, I found myself on the unsettling end of Disney Security this evening while taking photographs of the House of Blues at Downtown Disney.  While taking photos, I was approached FOUR times by Disney Security. Every time, they wanted to know why I was taking the photographs and expressed concern that I was with “the media.”  I assured them that this was my hobby and I was taking the photos for personal use and they would go away.  The fourth time was a bit different, though.

Previously, only one security guard would approach me and we'd have the same discussion.  On the fourth and final encounter, I was approached by several guards and their manager, Don.  I don't know Don's last name, since Disney only puts first names on their name tags.

I explained to Don that I'd been approached three times previously. He said that he knew. All of those guards worked for him and they had apprised him of their discussions with me.  I asked Don why he approached me and he said that there were complaints about me.  He never said what complaints he'd received, though, and never brought up complaints again.  I struggled to think what I could've done to cause complaints.  My photos were of buildings, not people.  I didn't ask anyone to move or change a thing.  In situations like that, you just sit and wait for the best moment to take your photos.  After all, everyone else has just as much right to be where they want.  One mid-Eastern family asked me to take their picture and I obliged. I kept my tripod near walls or other structures that weren't in the path of pedestrian traffic.  Basically, I can't fathom what complaint he may have received.

Don is a bit of a fast talker, but it takes him a long time to get to his point.  He dances around the issue and tells me of his responsibility for security.  He wants information, such as my name, where I work, why I'm taking photos and seems to want assurances that I won't be using the photos for commercial purposes.

By this time, I'm getting fed up with the interruptions, but I remained calm and polite.  So did Don.  Hoping to show him that I'm not there to cause any problems, I offer up some information in hopes of appeasement.  I shared my first and last name.  I let him know the name of my employer.  I told him the city where I lived.  Bear in mind that I was under absolutely no obligation to provide him with any of this information, but I wanted to be courteous and thought, as with the previous encounters, he'd be satisfied and go away.

In fact, Don told me that he was satisfied that I wasn't there for commercial purposes.  I explained HDR photography and he said that he had a passing understanding of it.  I showed him examples of my photos, hoping to set his mind at ease that I was just a harmless guy taking pictures of the House of Blues.

That seems to be the turning point.  Don started prodding me for identification while congratulating me on being so cooperative and putting his mind at ease.  At this point, I asked him why he would need my ID.  He expressed concern about my architectural photography possibly being used by terrorists.  He never used the word terrorist, but his implications were unmistakable.

I couldn't believe it.  I kept my calm demeanor, but I told him that his concerns were nonsense.  Disney is one of the most photographed places on Earth.  You can view the place in great detail from satellite on Google Earth.  There are thousands, if not millions, of pictures of Walt Disney World on the Internet and published in books – many by Disney itself.  It is absolutely ludicrous to think that my photos are going to be the ones that supports terrorism.

Don said he understood all of that, but should the worst happen, they wanted to know who was taking photos.

Suddenly, I'm not a visitor or a guest at Walt Disney World anymore.  I'm suspected of terrorism. He wants to know who to accuse of a horrible crime because of some photographs.  That's not the Disney experience you see in the commercials.

At this point, I let Don know that I'm not comfortable providing him with more detailed information about me.  He's never told me where that information will be recorded.  He's all but directly accused me of being a terrorist and, quite frankly, I don't see how handing him my driver's license is going to thwart the terrorist attack he's generated in his mind.  I told Don, twice during our conversation, that I'll be happy to leave the property if he feels I'm some sort of threat.  Don tells me that if I don't provide him with more identification that he's going to call the Orange County Sheriff's Office.

It's frustrating to deal with this kind of mentality.  Photography is not a crime, even on private property. At best, all a security guard can do is ask you to leave the property.  They have no right to tell you that you can't take photographs, confiscate your camera or other property, or even lay a hand on you.  Fortunately, Don didn't try anything physical at all. However, his demeanor definitely changed once I declined to give him my license.  His approach changed from the friendly, but concerned security manager into one of threats and intimidation. While he repeatedly told me that he was going to call for a deputy if I didn't provide my ID, I couldn't help but wonder exactly what crime he was going to report to the deputies.

My plan for the evening was to shoot my photos and have dinner at House of Blues, but Don had definitely turned me away from wanting to give any business to Disney that night.  I had also planned to renew my Annual Pass to take more HDR shots in the parks, but I can only imagine more intimidation and humiliation from Disney Security as a result.  After roughly twenty minutes of dealing with Don, I told him that I was just going to leave.  He was welcome to walk with me if he was concerned.

Don followed me, as did another uniformed guard, Eugene.  During the walk out to my car, Don was on the phone calling in more guards and, I presume, the Sheriff's office.  By the time I arrived at my car, at least two more guards swiftly arrived on bicycles, a couple more had walked up, and there was a Disney Security car.

I took my time walking out.  I took my time putting my gear away in the back of my car so he had plenty of time to let the deputy arrive, but I never saw one.  While I packed up my gear, I asked Eugene if this happened often.  He didn't respond and seemed somewhat uncomfortable.  I mentioned that he probably wasn't allowed to say anything and he told me that he just preferred not to speak.  That's understandable, since his boss was right there. Eugene moved from Maryland to Orlando and started working at Disney eleven years ago.  We talked a little about the weather and he mentioned that he liked the cold, but Disney was here.  I can apprecate that Eugene wanted to work there.  Maybe it's still “magical” for him.

While I was packing up, I overheard Eugene on the phone.  Although I don't know who was on the other end of the call, I presume he was speaking to someone at the Sheriff's office.  Don said that he asked for my name and I was unresponsive.  Well, that was a blatant lie and I told him it was untrue.  I reminded him that I'd given him my full name, where I lived and even where I worked.  Don seemed annoyed.  It was bad enough that he lied about that (I understand that lying to the police is a crime), but then a few minutes later he told the same lie again.  Clearly, this guy was working the phone to make me look like as bad as he possibly could.  A few lies here or there were probably OK if it helps catch a terrorist; perhaps that's how he rationalized it.

Once I closed the car I told them I was ready to leave, unless they planned to detain me against my will.  Don said they wouldn't do that and I was free to go.  He then instructed the several security guards around me to take plenty of pictures and get everything.  I found this somewhat ironic.  I'm sure that I was captured on security video while on-site.  Don's guards likely took photos of me, my vehicle, my license plate and property.  Then I drove off slowly and a Disney Security car followed me until I left the property.

There were plenty of people at Downtown Disney with cameras, ranging from camera phones to point & click to digital SLRs.  I can only presume I was singled out because I had a DSLR (Nikon D700) on a tripod and took my time taking photographs.  This happened around sunset and I took multiple shots from different angles, watching the light and waiting for crowds to pass.  To the average security guard, I can only presume this makes me “suspicious.”  I find it interesting that Don was concerned about my architectural photography (which really wasn't the point of my images, but so be it).  If I had been taking pictures of other guests, would he have instead accused me of a sex crime?  I don't know.

My Disney experience was one of false accusations, threats, intimidation and humiliation.  When a cadre of security guards carefully walks someone out of the park, people look.  They assume the worst about you.  I've heard that all Disney cast members are empowered to make sure a guest has a “magical” experience.  That policy must not extend to someone with a camera and a tripod.

Here's what I've learned from the encounter:

On the bright side, I was treated very well at Portofino Bay.  Dinner at Mama Della's was outstanding. 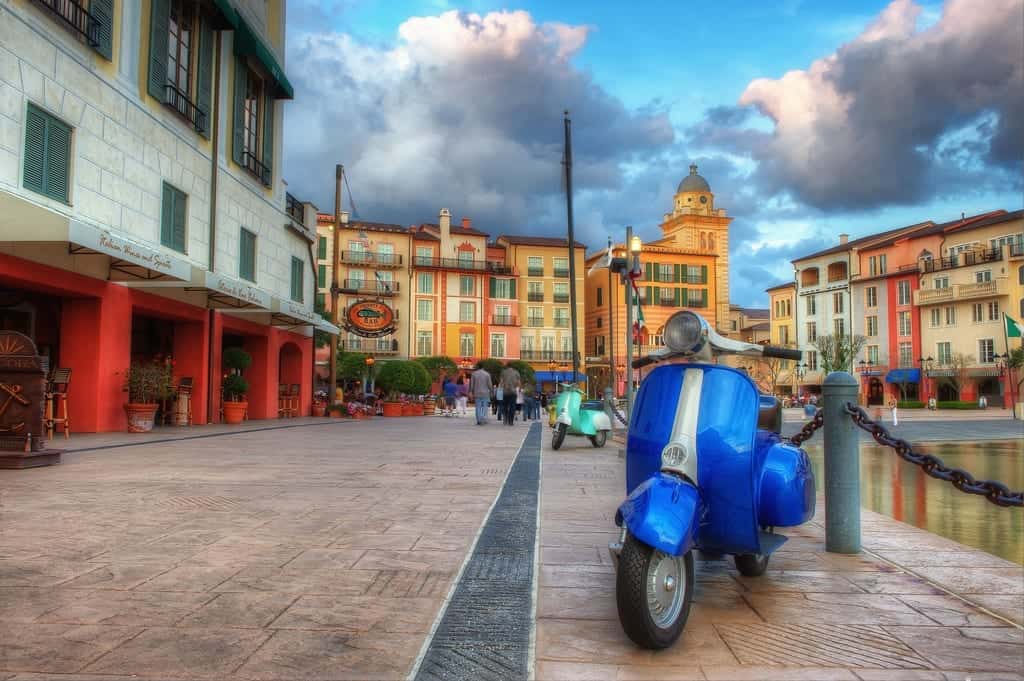