I went to B.B. King's Blues Club last night in Pointe Orlando. The place just opened the night before, but I couldn't make it for opening night. Fortunately, B.B. was playing for a few nights this week and I finally got a chance to see him perform live. It's not like he hasn't been to Orlando before. It's not like I haven't asked my friends to go with me to see B.B. King perform in Orlando before. The problem in the past is that every single friend I've ever asked to go with my, those friends who seemed enthusiastic about going to his show, always flaked out and caused me to miss the concert. The reasons are numerous and lame. Tonight, I said “screw my friends.” I went alone so nobody could mess it up for me.

I called the club earlier in the day to ensure that I could get a ticket. The lady who answered confirmed there were seats available and I opted for the $125 ticket. It wasn't the prime seat at the stage, but just a bit behind those folks. The price included a prix fixe meal from the club, also. I could arrive between 5:00 pm and 8:00 pm for dinner and B.B. started at 9:00 pm. I asked about their policy on photography. She told me that I should bring something concealable, as there's no flash photography allowed. I asked a few more questions, and I got the impression it'd be a hassle if I brought my Nikon D200. Instead, I just brought my little Canon P&S camera, which is much like bringing a cocktail umbrella to a tropical storm. It's there, but useless.

Once I got there, the night started off a bit wrong. They couldn't find my seat. The manager walked me all around the club and didn't know where it was. He passed me to someone else, who in turn passed me to another girl named Susan. Susan comped me a free drink and promised she'd make it right. It took her a while, and she mentioned giving me a full refund and putting me in a lesser table than I bought. I just smiled and told her that I trust her to work it out. It turns out they'd seated some other woman in my chair.

After almost a half-hour, they ended up putting me in a seat directly in line with B.B. King, sandwiched right between some of the fattest people I could've imagined. While that initially set me back, I have to say that both of them were are nice as could be and I didn't feel overly cramped for the night. A couple more rum & cokes came at me and I got my meal. Life was good.

These pictures are going to suck. Most people have these crappy little P&S shooters or their cell phones, but there are obviously some folks with their digital SLR's shooting with no problem. I should've brought my D200. Another opportunity lost because I didn't want to push it a bit. 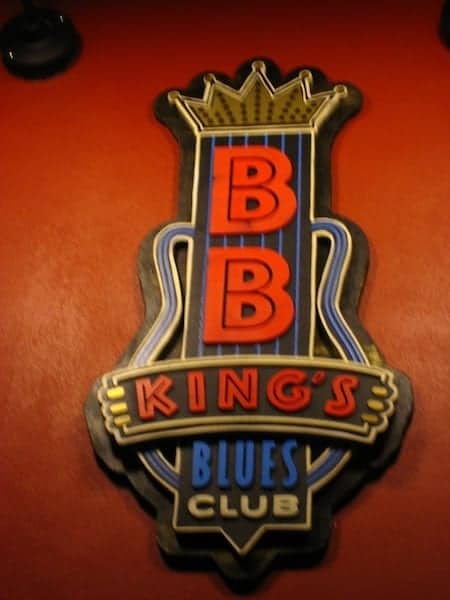 All around the club, inside and outside, you find traditional Memphis blues art like this photo reveals. You recognize it immediately as something a 3rd grader could've painted. I'm not sure why blues music equates with really poor painting, but at least it conveys enough that you're supposed to recognize the musicians depicted. 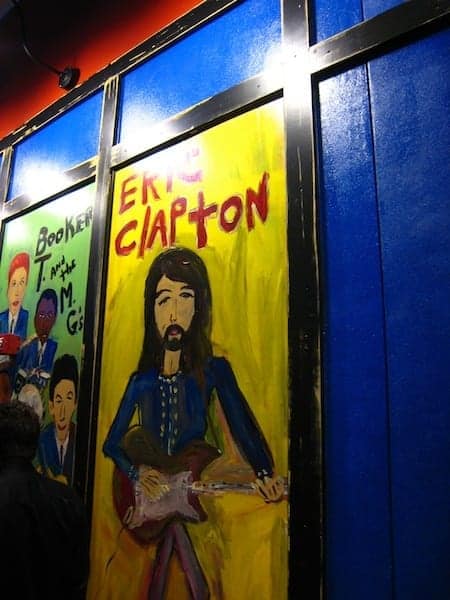 On a night like this, things run smoother for the staff if guests have limited options. I knew ahead of time that this event would have a prix fixe menu, though I didn't know what options were on it. 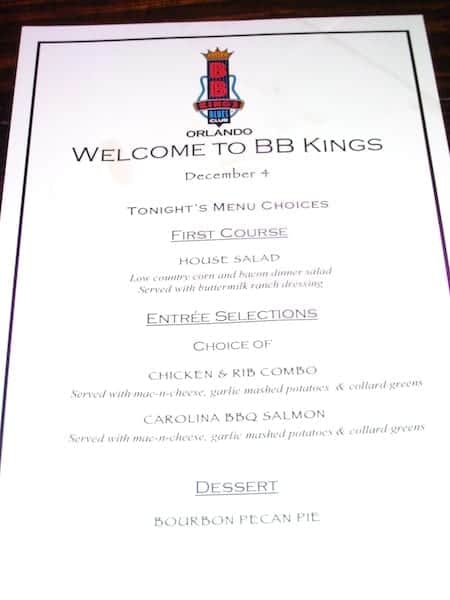 Your only real choice is whether you want BBQ Salmon or BBQ Chicken & Ribs. What the hell, I went for the chicken & ribs and skipped the salad (I hate lettuce). 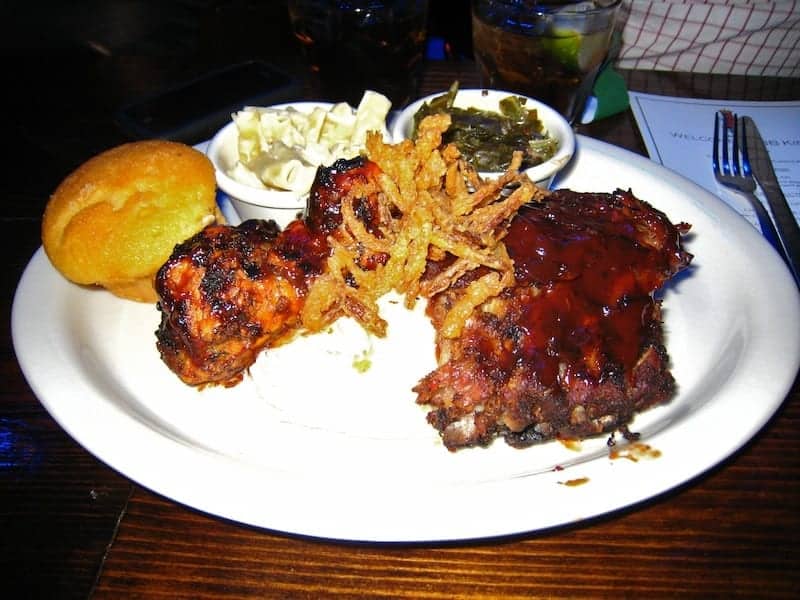 I can honestly attest that the ribs met the definition of being so tender that the meat falls off the bone. That's because, as I brought one of the ribs to my mouth, the meat fell off the bone onto my plate. The BBQ sauce tasted like some kind of bourbon/BBQ glaze. It worked for me, because I didn't leave any ribs or chicken behind. The mashed potatoes were fine. The other two sides didn't really appeal to me. Just for the hell of it, I tried the macaroni & cheese. It was bland, tasteless, and rubbery. The cornbread muffin that came with the meal was also fine, but not extremely flavorful.

Years ago, I ate at the B.B. King restaurant in New York City and remember feeling disappointed. I was prepared for a mundane meal, but I think that's the case for a lot of theme restaurants. My meal last night wasn't bad at all, but it wasn't outstanding. If I were going solely on the basis of a meal, I probably wouldn't make the trip back. It's not that much of a draw.

For desert, you didn't have a choice. The menu called for a Bourbon Pecan Pie. I didn't have my hopes up, as I'm really not a fan of pecans and didn't expect much from the pie. Damn, was I wrong. They served a little individual pie that was absolutely wonderful. The portion size was just right and I loved the flavor. This little desert elevated my opinion of the offerings enough that I may go back to try a few other dishes. 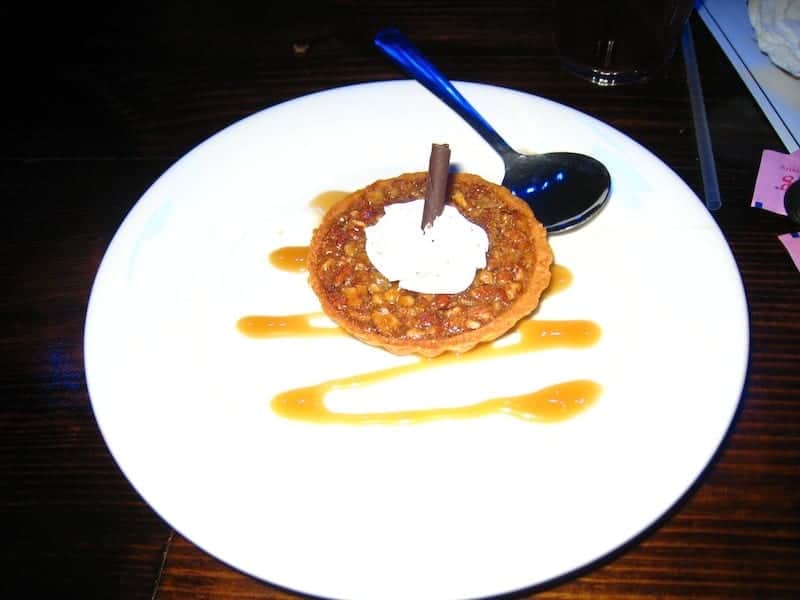 The staff was friendly, the food was OK, and the desert surprised me. However, the reason I came here was for the music. The opening act is the house band, The B.B. King All Stars. These folks exceeded my expectations. The first two numbers were instrumental covers of some Booker T and the MG's songs.

The band was tight and right on the mark. Four horns, two guitars, keyboards, bass and drums filled up the sound and didn't overwhelm by being too loud. The sound crew had to level out a few things, something I would've expected them to do before the show began. Otherwise, I had no complaints. After the first two instrumental numbers, the male and female vocalists came out to share some duets and their own songs.

Again, I was just floored with the great performance delivered that night. Although I came out to hear B.B. King play, I was thrilled with the notion that there's a great Blues/R&B band in Orlando that I can hear seven nights a week if I get in the mood. This band is outstanding. Go hear them live. 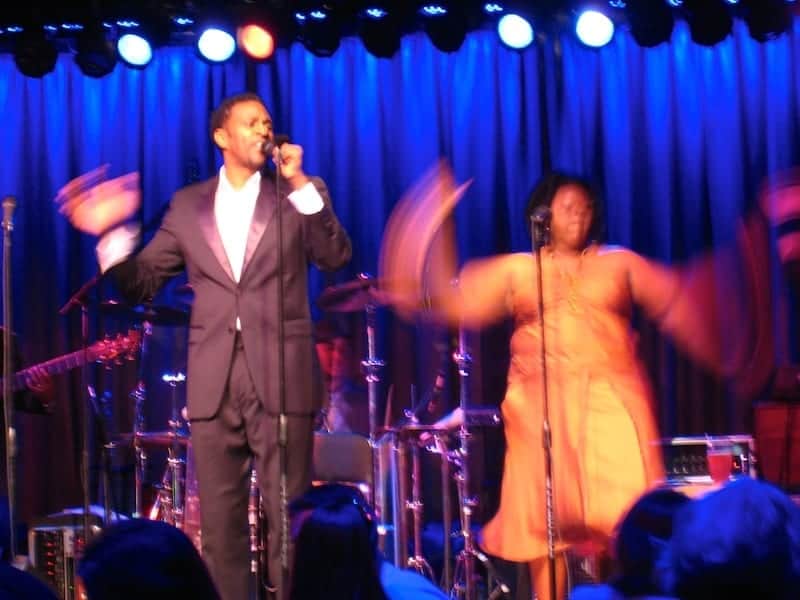 This is one of the first times I can remember wishing that the opening act played longer before bringing on the main event. I definitely have to go see them again when they can play longer or for more sets. Still, B.B. was the reason I was there. His band came out, set things up, and opened the night with a pair of instrumental numbers. Once again, another outstanding band filled the stage. It's such a joy to see a polished group perform and they didn't disappoint.

They introduced B.B. King and he came out, as expected, to a standing ovation. People love this guy, and it was easy to see why. He's kind, talkative, genuinely funny, full of facial expressions, and really knows how to connect with his audience. He's 82 years old and his voice is strong and he can play the hell out of his guitar. He told the crowd that he's diabetic, his knees don't work so well, his head doesn't, either. Even so, he's still traveling the world and performing. Maybe that's what keeps him alert and alive. It definitely seems to make him happy. 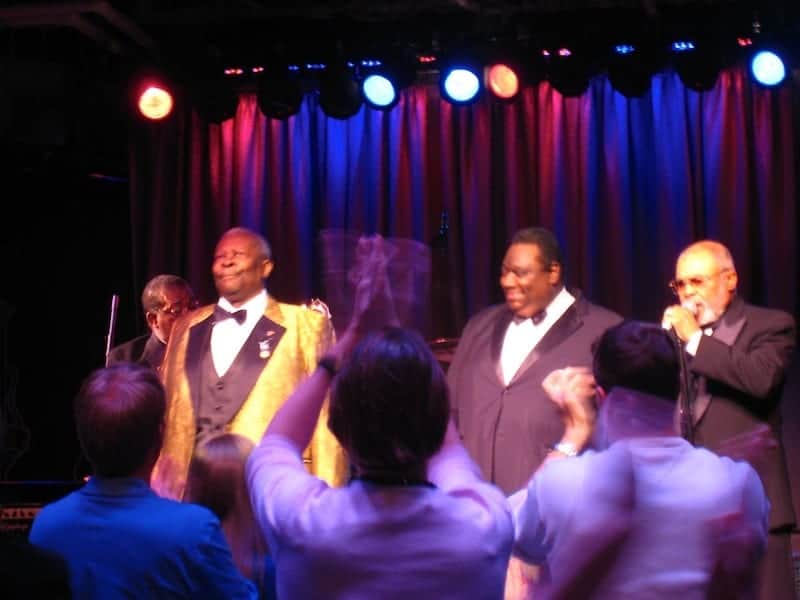 B.B. shares the stage well, making sure that every talented musician on his stage has an opportunity to shine. Maybe he shares a little too well. For the first half hour, he didn't play his guitar that much. Although he opened up with a few licks to show his chops, he hadn't really touched the guitar that much. Fortunately, it seems that's just the way he designs his sets to let the band show off a bit, and the later parts of the show feature his playing as you would expect. 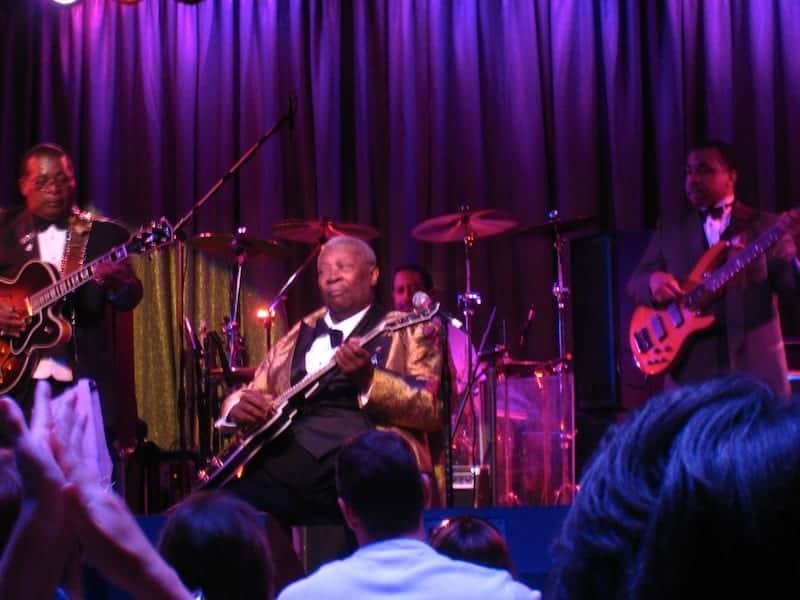 There's a more laid back feeling to B.B.'s show. The opening act was energetic and almost breathtaking. B.B.'s show is more of a simmer with occasional moments of boiling hot. With over 90 CD's and 500 singles behind him, there's no way he can perform it all. His songs ranged over the decades, including a very differently arranged version of U2's “When Love Comes to Town.” There are some staged moments of comedy, even in the middle of songs.

In between songs, or sometimes during them, B.B. talks to his audience to share his thoughts, experiences, and humor. Sometimes it's a fatherly talk. He tells how he believes that women are a gift from God (and they believe it, too). He also laments that no matter what a father does, he first thing a kid is going to do when he gets on TV is say “Hi, Mom.” Dads never win. Then he tries to inspire the men to treat their women right so they can go home and get some. Now that's a fatherly talk with a message I can appreciate.

B.B. King's show isn't designed to blow you away. It's designed to be a good night out with some good music and humor, something just to make you feel good. It worked for me. It also seemed to work for some blonde girl standing behind me. Somewhere along the last half of the show, I felt her arm slowly crawl around my neck (never a bad feeling). She was taking pictures of the show and decided to wrap her arms around me to steady herself. Sometimes she'd take pictures of the show, then she'd slowly turn the camera toward me. I finally tried to get a snapshot of her. This picture sucks, but it accurately reflects her state of intoxication. 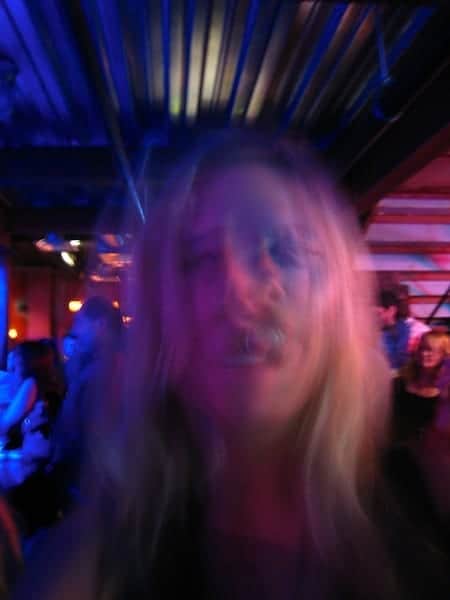 I have no idea who she is and I didn't ask her name since she appeared to be there with some other guy. However, she helped make my night complete. Even though I went to the show alone, it doesn't mean I minded having a beautiful woman crawl around on me. I gotta go back to this bar.