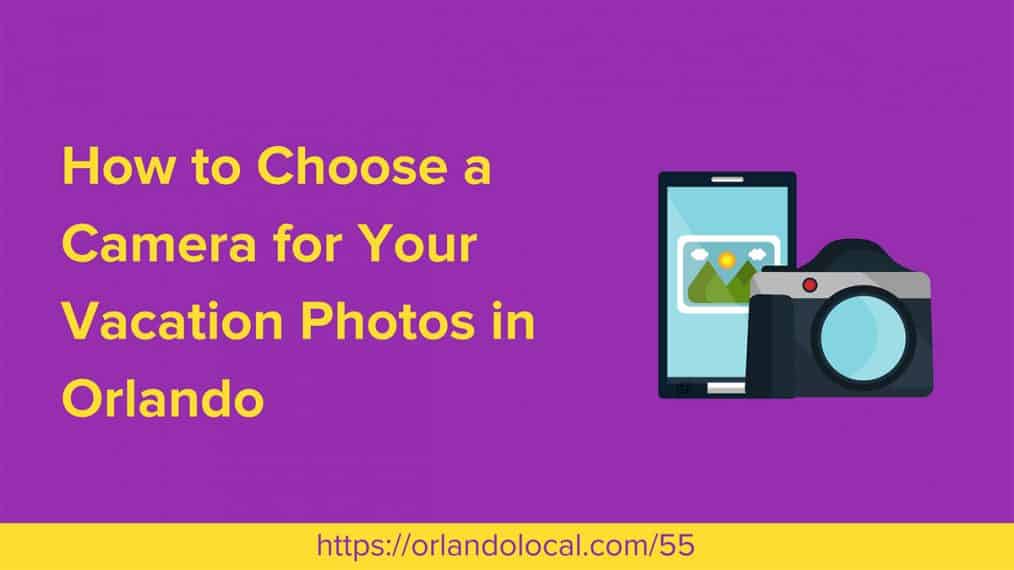 OL 055: How to Choose a Camera to Use on Your Orlando Vacation

Learn How to Choose a Camera for Vacation Photos

I know what you're thinking. Why do I need to choose a camera for vacation photos? I have a smart phone and it's always with me.

Trust me, I get it. Smart phones, particularly iPhones, take some really great photos these days. We love them and use ours every time we visit the parks. Since they're online, you can quickly share photos on Instagram or other social media without waiting to download them to a computer.

You know how that feels. It's like you lost the spontaneity of the moment.

On the other hand, cameras on smart phones have some limitations. While they're convenient to take everywhere, it doesn't take much to find out what they don't do well.

**This post contains affiliate links and I will be compensated if you make a purchase after clicking on my links.

One of the first problems you discover is that smart phones don't perform very well in low light. If they can get a photo at all, it's usually filled with a lot of noise. That pretty much ruins the photo. Poor low light performance also means a lot of those shots are blurry.

Smart phones aren't the most stable devices. Yes, you can get stabilizers for your smart phone, but then you lose the convenience of just stuffing the phone in your pocket. Now you're walking around with something that looks like the old Whee-Lo toy I had as a kid.

Another problem is that they can't truly zoom. Smart phones have a fixed lens. When you pinch to zoom your photos, all you're really doing is cropping the photo. The more you crop, the more pixel density you lose. Basically, you're just making a smaller photo that looks awful when you post it online.

They're also slippery things. Try holding an iPhone to get a video while on Expedition Everest. That sucker will pop right out of your fingers when the G-Forces kick in during a curve.

Why You May Want a Point & Shoot Camera

The market for point and shoot cameras really took a beating because of smart phones. However, there are times when they step up the game quite a bit.

If you want to create a Vlog style video during your vacation, these cameras are hard to beat. You get much better video quality compared to a smart phone. Not only can a point & shoot zoom, but you can also get some bokeh (that defocused background) in your shots because it has a larger lens and sensor size.

Improved sound is another advantage for point & shoot camera. Check out some Vloggers on YouTube to hear examples. While the microphone is small, they actually work rather well. The downside for every camera is wind, but that's another story.

We use a Canon G7x Mark ii. It's one of the most popular vlogging cameras on the market these days, and for good reason. Add a small tripod, like the Manfrotto Xtreme, and it serves double duty as a hand grip.

The Canon G7x Mark ii also has built-in optical stabilization, which means you can have a reasonably steady video when you're done, compared to the jerky results you get from holding an iPhone at arm's length.

While it's a great improvement in photo, audio and video quality, it's still small enough to fit in your pocket. The Canon G7x Mark ii also has built-in wifi to connect to your smart phone. That means you can take a better photo, transfer it to your phone, and post it right away on Facebook or Instagram.

Why You May Want a Dedicated Video Camera

Maybe photos aren't your thing. Instead, you want lots of video. While I'm still happy with the Canon G7x Mark ii, some people are more comfortable with a dedicated video camera that fits in the palm of your hand.

They're easy to use, have great quality, and offer more options for lenses, zooming and capturing video. The Canon has an articulating display on the back so you can see what you're recording, but palm-sized video cameras pioneered that concept and have brilliant displays.

I went another direction for action video by getting a GoPro HERO5 Black. It's small, yet powerful.

For driving videos, I can mount this in my car using the GoPro Suction Cup Mount. That gives a nice point of view video, either driving down I-4 or through the Welcome to Walt Disney World gate.

You can mount a GoPro almost anywhere:

Let's be honest, the sound from a GoPro sucks. Be prepared to put music over that video, talk over it in post processing, or perhaps use an external recording system if you really want to geek out.

When to Use a DSLR

There are dslrs, and there are DSLRs. These camera feature interchangeable lenses, so you have options for the quality of your results. We see more than a few folks walking around with a small DSLR around their neck. It's cute.

To be honest, most of them could save the pain in the neck and get pretty much the same results with the Canon G7x Mark ii that I mentioned earlier. There isn't as much of a quality gap between that point & shoot and the small, crop-sensor DSLRs people use. It's also a lot less expensive and fits in your pocket.

There are real advantages to photography with a DSLR, but convenience isn't one of them. This is the type of camera you choose when capturing a photo is more important than having fun in a park. It's what you use to create art, not get snapshots with the family.

We're Nikon photographers and have a bucket full of lenses. They aren't exactly cheap, either. The Nikon 70-200mm VR II lens goes for about $2100. It's also long and heavy. You could use it as a billy club.

That's just one lens, without considering the cost of a camera or other lenses. This kind of photography isn't cheap, but it lets you do some interesting stuff.

They're great in low light. Put it on a tripod and get some nice fireworks photos. 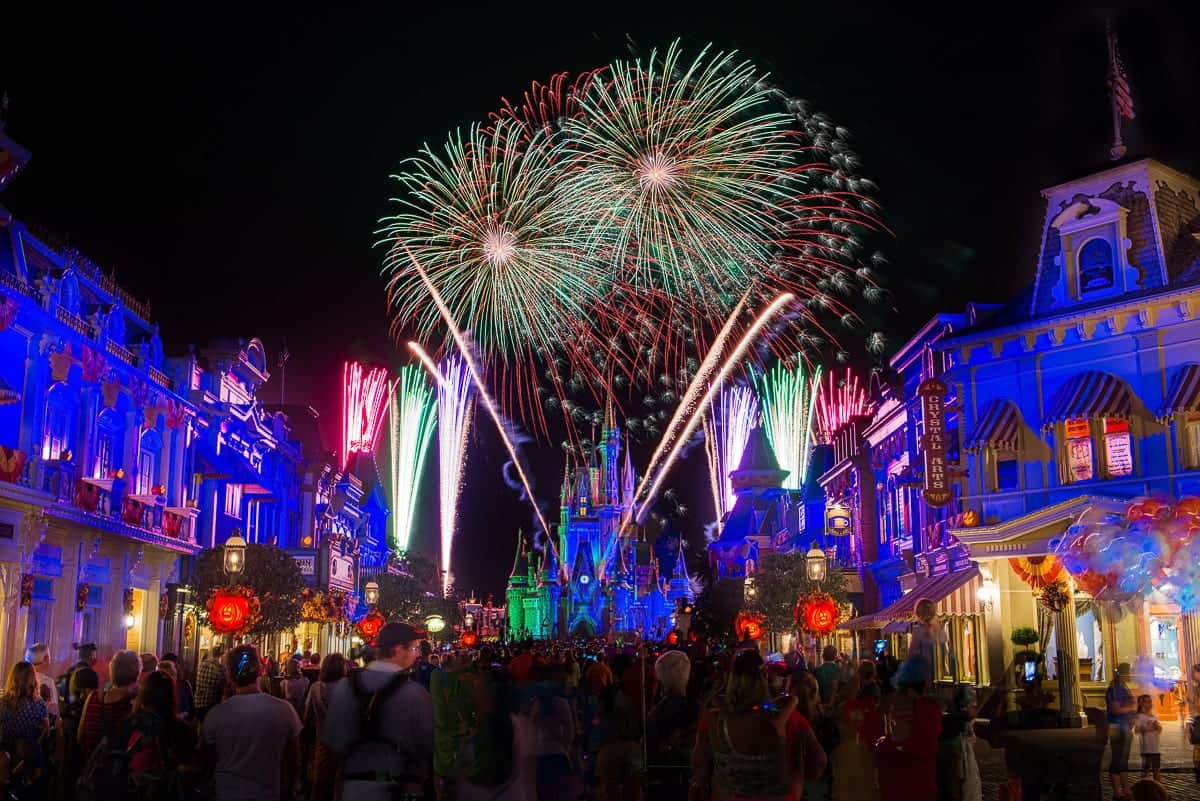 You can get some interesting motion tricks with a DSLR. 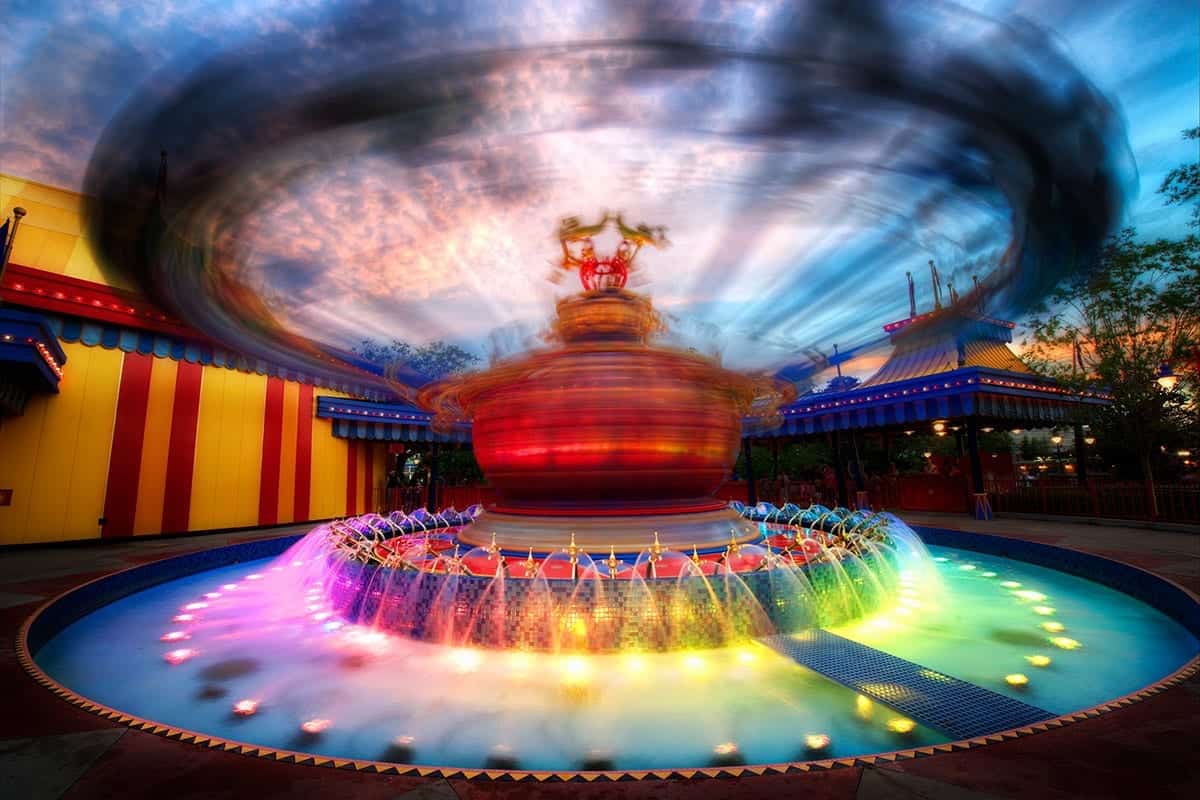 They're hard to beat for portraits. 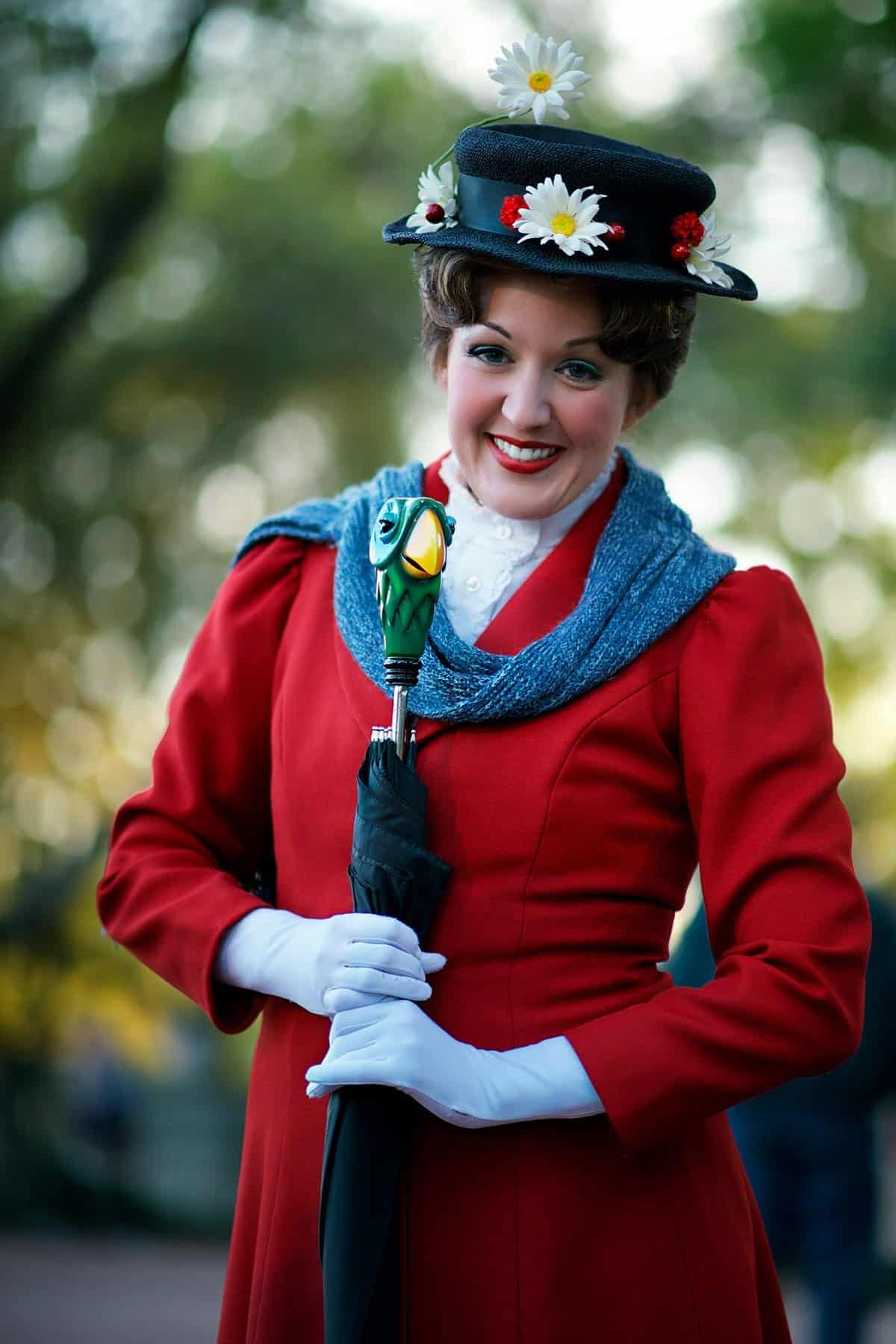 A DSLR is bulky, but it's the tool you want to get some of the most unique photos in conditions where smart phones and point & Shoot cameras won't deliver results.

They're great for action, since you can easily control shutter speed and aperture. 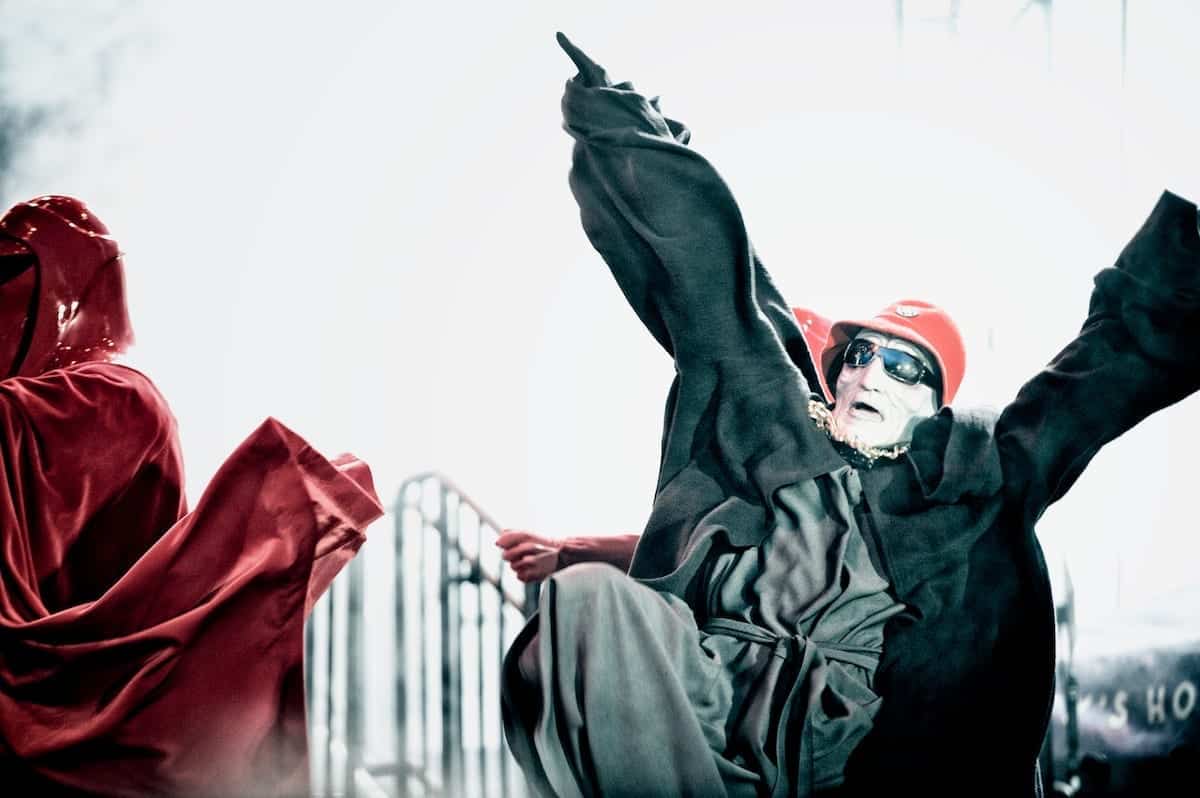 Lugging around a DSLR is a commitment. It's the option you choose when you want a high quality photo at, perhaps, the expensive of being present in the moment.

OL 023: How to Photograph Fireworks at Walt Disney World

Want to have The Orlando Local Show downloaded for you automatically when a new episode comes out? It's easy and free. Just click on one of the links below and you can subscribe on iTunes, Google Play Music, Stitcher or Blubrry

Earn a bounty for new free trial sign-ups to HBO on Amazon Channels.